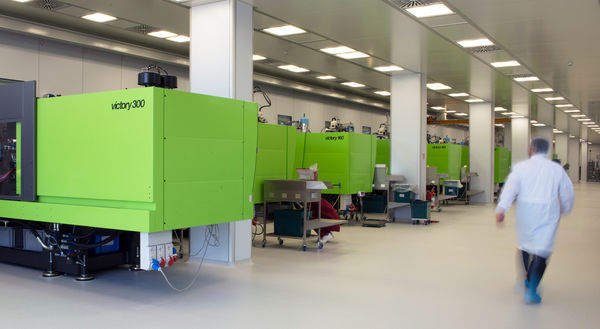 Production created from scratch with very clear ideas on what to produce and the best industrial method to do it. The goal of Luca Ferrari and his business partner Massimo Magnani, owners of the new Italian company Luc & Bel, is simple: to be the first in Europe to provide its clients – the largest companies in the biomedical industry on a global scale – with both individual parts as well as finished products.

The company started up implementing a “model company” layout, which the founders developed by capitalizing on their extensive industrial experience in the biomedical field, and Luca Ferrari says «In particular, we are improving on anything that had been done in the past, selecting the best technology available on the market, automating the entire production line and counting on innovation and quality». According to Ferrari, the investment well exceeded five million euro, including the building of a clean room which contains, among other things, 12 tiebarless fully automated Engel Victory injection machines (80, 120, 160, 220, 300 tons), and an initial assembly cell, while more will be added at a later date.

It is not often that an Italian company purchases 12 injection machines at one time, and in particular chooses a single-brand solution. «Where we worked before we had presses made by a number of manufacturers – Ferrari points out – but in this case we relied on a single supplier, because in addition to the quality and performance of the machines, we looked at the solidity of the brand. Moreover, although in the our start-up stage, 12 machines were needed, we decided to make this investment because a later addition of new equipment into the clean room would have posed significant logistical problems, not least the risk of ruining the floor treated in compliance with clean room standards».

The clean room and production flow

The clean room, which was designed to accommodate additional presses on the opposite side to where the current ones are, houses an overhead crane enabling rapid mould changes by a single operator, thanks also to the fact that Engel presses are tiebarless.

«Although our clean room is Class 8 certified, which is more than sufficient for the work we do, tests have shown it meets Class 6 standards». A quality system certificate is vital for operating in the biomedical field and, in fact, Luc & Bel started out from the very beginning with IS0 9001 certification awarded by TÜV NORD Italia and a Quality Management System Certificate in the medical field to ISO 13485 standard awarded by TÜV Rheinland.

«To feed the injection machines – Luca Ferrari explains to illustrate the production flow – we created a corridor external to the clean room where various apparatus is located used for the transport of granulate».

[box title=”Maximum cleanliness” color=”#f8911b”]The moulding and assembly of Luc & Bel fittings for the biomedical sector takes place in a 1,200 square metre Class 8 clean room. But what exactly is a clean room and what does the class of the company refer to? The term indicates a controlled atmosphere department (chemical, mechanical or electronic) where air is very clean, meaning the number of dust particles suspended in the air is much lower than in a normal environment.

Clean rooms were first introduced by American companies specialising in the production of microprocessors to limit damage to microcircuits created by suspended dust. There are various types, classified – pursuant to ISO 14644-1 – from a value ranging from 1 to 10 based on the number of 0.5 µm (or higher) microparticles present in one cubic metre of air. In the case of Luc & Bel, certified to ISO Class 8, there are 3,520,000 particles per square metre, while in Class 6 the number goes down to 35,200. In a normal production department, on the other hand, the number of suspended particles is higher, therefore over 35 million per cubic metre.[/box]

Once the clean room was complete, production began in January in three shifts: an essential factor for justifying this type of technological investment. Today, we have ten people taking care of production (including the toolmaker, production manager and quality manager) out of a total workforce of 14 people, which might become 22-23 as time goes on.

«We began production on two fronts: in part producing fittings from our own moulds and in part as subcontractors using the moulds provided by the client. An essential solution at start-up, Ferrari points out. The goal is to combine the production of standard and high quality or high added value manufactured goods, which are not liable to be undermined by low-cost competitors. In particular, we focused on parts that had not previously been available on the market, many of which are currently being patented. We designed and made complex and costly moulds, which can be used to create assemblies in a single cycle, while three types of parts had to be made before, thereby eliminating the assembly stage. We carefully studied products and moulds in order to be able to produce fittings that can serve sectors other than the biomedical sector, from infusion to dialysis, cardiac surgery and transfusion».

High added value pieces, with higher margins and at the same time that can reduce costs for the final purchaser.

[box title=”The biomedical district in Mirandola” color=”#f8911b”]Luc&Bel has operations in the Biomedical District in Mirandola, comprising of a sizable number of companies specialising in the production of medical and disposable equipment. A district whose origins date back to the 1960s, when Mario Veronesi, a pharmacist who had an intuition about the strong potential of biomedical and, in particular, disposable products, along with Carlo Gasparini founded Miraset, a company which has, among other things, developed a sophisticated artificial kidney. Over the years the district grew, with a strong drive from 2000 onwards, when the success of the firms in the area began to attract foreign investments. The earthquake of 2012 hit business in the area very hard, and today it has been further weakened by widespread relocation and competition from products from low cost countries. The district still has great international credit thanks to the advanced technological capacity of firms in the area and the quality level that remains exceptionally high.[/box]