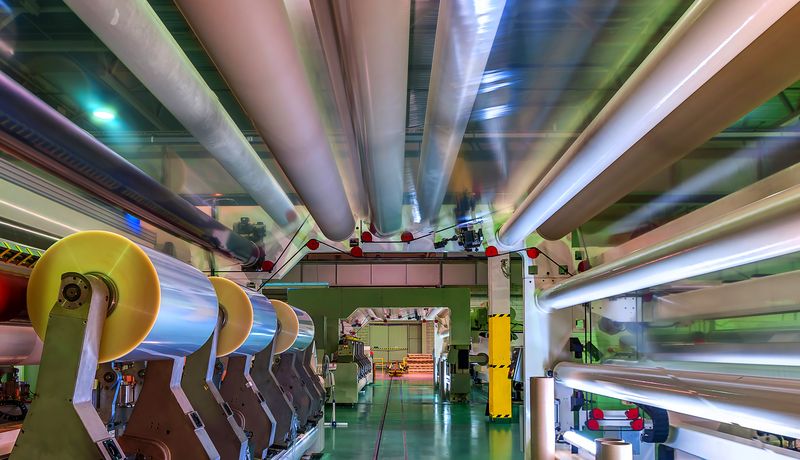 Operations that might appear simple, such as cutting and trimming plastic film, actually require accurate planning and the same level of attention that is reserved to other areas of a production plant if they are to cut part of the costs – trimmings have an economic value – without slowing production or affecting the quality of the finished product. This is why the Jindal Films facility in Brindisi decided to replace their existing trim evacuation and conveyance system with one that would deliver higher performance. After bids were tendered, the new evacuation system was supplied by a company based in Casazza (near Bergamo, Italy), New Aerodinamica. Jindal Films produces 35,000 tons of oriented polypropylene film annually, which are then coated with lacquer and metallized. The order was for two standalone trim cutters, to be fitted with an evacuation system complete with intake, conveyance and delivery into special containers.

A tall order
The film manufacturer’s requirements posed a tall order: cutting speeds up to 1,200 metres a minute, maximum trim width of 50 mm, with different types of film and formats, noise contained to within 87 dB and conveyance of the material to a hundred or so metres from the cutting location, outside the facility, crossing a private road, to where the containers were stored. The trim conveyance pipes had to be positioned on a self-supporting IPE 180 hot galvanized rack with a free span of about 8 metres. Moreover, the presence of electrostatic charges and the risk of jamming had to be considered. «Working in different sectors, we have acquired a lot of experience in designing custom systems, developing specific solutions for applications where speed is a critical factor, such as the paper industry, where cutting and trimming centres process 2,800 metres a minute», Paolo Radaelli says, CEO of New Aerodinamica. «The Jindal facility posed therefore an interesting challenge, but within our capabilities».
«Already in the initial bid stage, the New Aerodinamica project was unique because of a series of technical solutions that after months of operation have proven to be effective», Giancarlo Laus from Jindal Films notes. «I’m thinking, for example, of the special paint coat inside the tubes, or the coupling and sealing system of the single pipe sections. The “false air” system is really interesting. It automatically regulates evacuation of the material depending on the speed of the machine, preventing trim jamming in the conduits. We also appreciated the designers’ willingness to evaluate problems that could have arisen in system management, such as noise, dust emissions, or ease of use. Time after time they found a solution that was effective and that was appreciated by our operators».

The structure of the system
When developing solutions to operate alongside extrusion and plastic film converting plants, New Aerodinamica proposes its system with injector which evacuates and conveys trim material continuously, without having to cut it. This solution reduces maintenance, because there are no mechanical parts, as well as setting operations for format changes (for film thickness), and it prevents dust emissions inside the production department. This way, the containers can be located up to 100 metres away, and the noise of the fans be kept within tolerated levels.

Evacuation
Looking in more detail, the trim is picked up through two aerodynamic nozzles designed to guarantee smooth intake of the materials. In the first cutting unit, they face upwards, in the second they face downwards, according to the machine configuration. To facilitate format changes, the vents are mounted on a track that runs from one end of the machine to the other, on bearing sliders.

False air
A unique feature of the nozzles designed by New Aerodinamica is the “false air” device, used to regulate the aspiration force on the basis of the cutting speed, introducing ambient air just before the nozzles. This is because if the fan is dimensioned to suit the plant’s top speed, evacuation could be too strong in the start-up and slowdown stages, tearing the trim or creating micro-tears that would compromise the quality of the film.

Injector system
This is connected to the nozzles by a short metal pipe, which has the purpose of ensuring the continuous flow of plastic trim to the storage containers without shredding the material, thereby preventing the risk of jamming and dust build-up.

Fan
The fan cabin is located about ten metres from the cutting plant. It is driven by motors fitted with inverters in order to optimise conveyance of the materials according to the weight of the film and the speed of the line, which consequently reduces energy consumption. The fans have belt transmission to prevent resonance effects and, thereby, annoying vibrations. At the client’s request, the noise of the fan unit is contained, at 70 dB, less than set out in the specifications (87 dB). The result is achieved by soundproofing the cabin with 100 mm thick sandwich panels filled with compressed rock wool.

Pipes
There are almost 90 metres of pipe between the vents and containers. The pipes partly run outside the department (even crossing a private road). To ensure performance and long life, the pipes are painted iron rather than galvanized steel, and certified up to 3 bar over-pressure to ensure more efficient conveyance of the material, as well as to prevent dust leaks. The use of rubber supports minimizes vibrations and noise.

Antistatic devices
To prevent the risk of material jamming, because the coated film is electrostatic, a number of charge reducing systems have been adopted, through active systems such as antistatic bars and ionized airflow, as well as passive systems like internal coating of the pipes.

Separators
Outside the facility, where the containers that collect the material are located, two aerodynamic separators have been installed, because every cutting unit can work on two different types of film. Depending on the film being processed, the operator can select the destination container, using electro pneumatic separators. The equipment works without the support of mechanical sealing units as it is kept in perfect equilibrium using the balancing fans. The discharge unit is supported by a hot galvanized metal structure fitted with access stairs and perimeter walkway. The structure was designed with particular care by New Aerodinamica, because it was deemed to be a fundamental component: in fact, it makes the containers entirely independent and provides safe access to the separators for control and maintenance purposes. Prior to construction, the company carefully evaluated the choice of metal profiles (in this case, IPE 220) based on the GPS position of the installation in order to evaluate any seismic, force, and wind direction movements.

Hassle free construction and start-up
The plant was designed entirely by New Aerodinamica, which also supplied the machines and tools for transportation. Installation, on the other hand, was handled by an assembler selected by the costumer. Construction and start-up of the evacuation system took less than a month, and the only interruption to operation of the cutting unit lasted the half day it took to replace the old vents with the new ones.

The Jindal Films plant in Brindisi 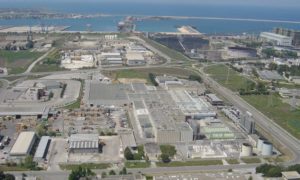 The two film cutting lines by New Aerodinamica were installed at Jindal Films’ Brindisi (Italy) plant, where the Indian group produces polypropylene coextruded film for flexible packaging, which is then coated with lacquer and metallized. The plant has an output capacity of 35,000 ton annually, and 200 employees. Production is organized according to this flowchart.
Extrusion
Polypropylene granules are loaded into the extruders where they are melted and transported to a metre-wide extrusion head. A water hardening process is used to form a carpet a few millimetres thick, which is then stretched lengthwise (approximately 1:4) through a series of heated rollers, and then it is stretched crosswise (approximately 1:10) in a hot air oven.
Calendering
After a free flow air section, with a spectacular visual impact, the film has now been widened to 10 meters and to a thickness of just a few micron (from 15 to 60 depending on the type of product). It is then sent through a series of rollers that remove the edges, recover the trim, and check the thickness with feedback to the extrusion head. The rollers also have the task of increasing the surface tension of the film through a “flame” treatment that improves its print qualities. Lastly, the film is wound on a reel, ready for a brief period of rest before being cut to the size requested by the client.
Cutting
After the operator has completed the checks, the film reels are sent to a cutting machine to be rewound on special spindles according to the size (width and length) and the next production stage. In particular, a part of the film is destined directly for packaging and for the final client, while a portion is prepared for “in-house production”, and sent to subsequent coating or metallizing stages. During the cutting stage, areas with defective alignment and the edges of the film width can be removed. For both, the evacuation systems are ideal because of their versatility and simplicity.
Lacquer coating
The process begins with the reels that have been cut to the requested size. In an initial stage, the film is heated before going to a corona treatment station, then it is prepared for the water-based coating. Upon output from every section of deposit, the film passes through an oven to eliminate coating moisture and the layer deposited is stabilised. The process is completed when the reels are rewound ready to be cut to the final client’s specifications.
Metallizing
This process also begins with the reels already cut to the desired size. Once the machine is loaded, the high vacuum produced by a progressive pump system creates a continuous aluminium wire which, above special pots, is “sublimed” along the width of the film. The aluminium vapours condense in a very thin layer as they are cooled by the feed roller. At the end of the line, a cutter trims the film to the size required by the client and, then, the finished product is sent for packaging and to the truck for delivery.