The modular F-Series is focused on packaging technologies, including in-mould-labeling (IML), barrier injection and cube technology. The F-Series, ranging in size from 500 to 6,500 kN, can be configured as an all-electric, hydraulic, or hybrid machine, depending on the user’s manufacturing requirements. Visitors will see an all-electric F 200 with a clamping force of 2,000 kN equipped with a size 50 Advanced Performance (APe) electric injection unit. Using a 4-cavity mould and an IML system by H. Müller from Switzerland, this machine will demonstrate production of thin-walled rectangular lids with labeling. Every 3.1 s, four lids with labels weighing 8.2 g are produced. The lids are taken out of the mould laterally, monitored by a vision system for quality, stacked and removed. 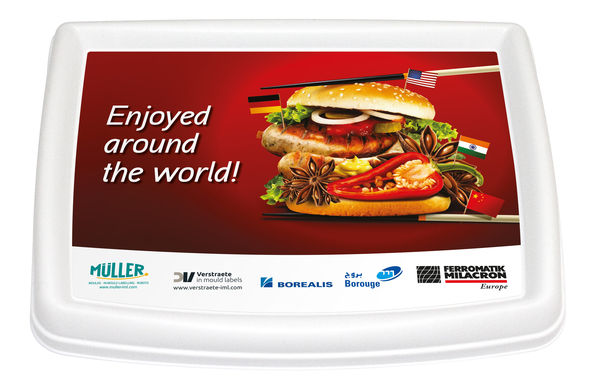 An F 350 hybrid with a clamping force of 3,500 kN is especially notable for its speed. This machine uses a size 70 Advanced Performance (APh) hydraulic injection unit. Driving a 64-cavity mould by Corvaglia (Switzerland), the machine will produce 33 mm beverage closures with a part weight of 2.6 g every 4.5 s. Quality is monitored by a vision system from IMD Vista (Switzerland) with good/bad part separation at the machine.

The third machine in the F-Series at the Ferromatik Milacron both is an all-electric 2,700 kN cube moulding machine, the F 270 Cube. The machine has generous tie-bar spacing of 750 x 750 mm. It features an electric rotating mechanism within the machine and an 8+8 cavity cube mould with four sides, both made by German-based Foboha. The two parts are screwed together by automation on the operator and non-operator sides of the machine and removed via an Air-Move-System made by Trio-technik (Germany). The shot weight in each parting line is 77.6 g, or 9.7 g for each twist top. The cycle time is 9.5 s. 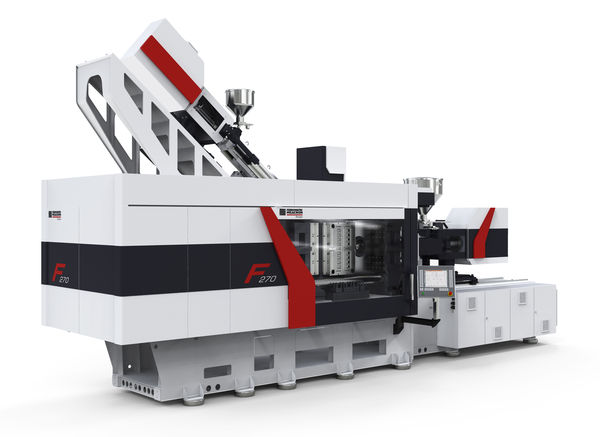 The fourth machine in the F-Series will be on display at the Mold-Masters booth. Here a 1,600 kN F 160 can be seen, incorporating a hydraulic Advanced Performance (APh) size 45 injection unit in combination with a vertically mounted E-Multi injection unit built by Mold-Masters. Using a 16-cavity mould from F&S Tool (USA), this machine will demonstrate production of closures with two components using barrier injection. The primary injection unit produces the main component while the vertical injection unit produces the core material. The impermeable barrier core material prevents gasses from getting out, and odors from getting into the interior of the part. The 4.3 g closures are produced with a cycle time of 4.2 s. As with the F 350 described above, part quality is monitored with equipment from IMD Vista.

The Elektron 30 will feature an international size 55 injection unit and will produce applicators for 1 ml medical ampules on a four-cavity mould made by Braunform (Germany) with a cycle time of 9.1 s, and a part weight of 1.6 g. A second Elektron machine at the DME booth will demonstrate the manufacture of Frisbees.