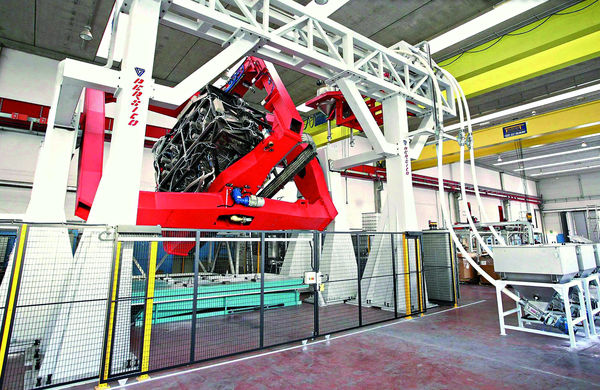 Rotational moulding, or rotomoulding, is a technology used for manufacturing middle and large-sized hollow parts featuring constant thickness and complex shapes. Another important characteristic of this technique is the possibility to obtain seamless multi-layer and multi-component products, thus eliminating all problems related to pneumatic or hydraulic tightness (besides avoiding an operating step). The polymers generally used include polyethylene, polypropylene, PVC, polyamides, polycarbonate and polymeric blends.

However, despite its production potential and the end-product quality, in terms of aesthetics, too, some factors have prevented the expansion of rotomoulding in industrial applications. During the last few years, anyway, the increase in labour and energy costs has led to a remarkable technological transformation, aiming at persuading companies to keep on using and investing in this technique.

In order to meet these needs, the European Commission approved, in 2010, within the Seventh Framework Programme (FP7) the Rotofast research project, whose goal is to find innovative technological solutions to increase productivity while cutting processing costs by focusing on cycle times and energy consumption.

[box title=”The Rotofast project partners” color=”#f8911b”]The project, based on an initiative by Persico (headquartered in Nembro, near Bergamo), was developed by an international team consisting of research centres and companies operating in this industry.

The research which produced the results described above was supported by the European Community within the Seventh Framework Programme (FP7), and was managed by the Research Executive Agency (REA). http://ec.europa.eu/research/rea ([FP7/2007-2013] [FP7/2007- 2011]) in compliance with the grant agreement nº [243607-2].[/box]

The importance of electromagnetic induction

The R&D team started with the purpose to eliminate the traditional propane gas oven, replacing it with an electromagnetic induction heating system. The Leonardo machine by Persico was modified and implemented in order to integrate all PLC configuration and control tools as well as new induction technologies. The electromagnetic waves are generated by copper coils, positioned and installed on the mould and supplied by a high-frequency generator located outside the rotational moulding machine. This new application technology makes it possible to concentrate heat in selected areas of the mould, thus minimising heat loss.

The radio-frequency transmitted also reaches hidden areas with much greater precision and accuracy, following the mould shape and the plastic part geometry, while the copper coils can be pre-formed and processed on an industrial scale. The induction heating is enhanced by the Joule effect generated by the electricity running through the copper coils in contact with the mould. The mould, made of aluminium, is heated more consistently and uniformly, thus accelerating polymer lamination and avoiding internal stress, thanks to the low surface thermal gradients of the cavities. This induction technology results in short start-up and shutdown times of the heating system, while the integrated PLC, by communicating with probes located both inside and outside the mould, performs real-time adjustments of the power generator synchronisms.

Many sizes for different weights and cavity numbers

The Leonardo machine, available in several sizes, can accommodate moulds for parts with different weights featuring many cavities. It is also important to underline that, thanks to this technology, it is possible to inject the raw polymer into the mould automatically, through special nozzles positioned in its cavities. The high-frequency generator emits a current reaching the mould, which is firmly fastened to the machine. Thanks to this current the mould can be moved around two axes. In order to reach the copper coils, the current runs through two rotating joints specially designed and manufactured, located in the shaft/hole transmission points of the rotational machine.

The entire system has been designed to avoid power losses on the path from the generator to the coils; the plant layout also took in consideration the reduced distance among the generator, the power transmission systems and the mould.

As regards cooling, ionic liquids were tested, but their use was abandoned since they turned out to be too corrosive. The choice fell on water, adequately treated, thus obtaining considerable improvements compared to the current state of the art. The cooling system is integrated: coils feature a hollow cylindrical cross section, convey electricity to the copper walls and let liquids flow inside the internal cavity. The coolant is conveyed from outside as well, through special rotating joints equipped with water-tight seals.

The rotational moulding, or rotomoulding, process can be subdivided into four single steps: the powder in the required amount and colour is fed into the mould; the mould is heated by rotating it according to the planned primary and secondary rotations; the mould is cooled down by using forced air or atomised water, always following the pre-set primary and secondary rotations; and, finally, the mould is opened and the moulded part is removed. Then, the cycle starts again. During the heating phase, a special oven heats the mould walls, thus making the plastic powder inside the shell reach, by thermal contact, its melting temperature. The mould, rotating around the X and Y axes, laminates the polymer evenly, which “slides” on the internal walls of the mould cavity. During the cool down phase, air and water are injected through a dedicated valve and slot on the plastic moulded part, which still is inside the metallic mould halves. This, by contact, lowers the temperature of this “plastic tank”. The variables involved in determining the total cycle time are: the heating temperature, the cooling temperature, the two rotation speeds, and the mould heat exchange coefficient, as well as, of course, the material’s melting temperature.[/box]

From predictive simulation to the end product

The Spanish research centre Inspiralia, one of the project partners, developed a FEA software for carrying out the thermographic analysis of the new electromagnetic heating system; it can be integrated with all conventional 3D software on the market. FEA enables designers of hollow plastic parts and rotational moulds to perform predictive analyses in order to ensure that both the mould and the end product have the correct dimensions. Inspiralia researchers detected the effects of electromagnetism on the mould and, on this base, calculated its efficiency. They powered coils executed in simple configurations and varied their distance from a cylindrical object, assessing the different thermal impacts.

The software was then implemented on the basis of empirical data collected from numerous laboratory tests performed on two different mould metals – steel and aluminium – and subsequently compared to each other. The validation was carried out during the rotomoulding cycle on the Leonardo machine by Persico, at the Queen’s University.

This software permits the correct dimensioning of the cross sections of the radio-frequency generator coils, and allows the calculation of the frequency density and distribution on the external surfaces of the metal shell. In other words, it makes it possible to determine, in a simulation, how the heat generated is distributed on the plastic part inside the mould. Taking all possible configurations into account, the melting and cooling temperatures inside the mould cavities are made uniform in order to allow the hollow part to shrink correctly. High temperature gradients would affect the stress inside the component, as well as compromising the aesthetic properties of the plastic end product.

The results of applied research

All these solutions together enabled the development team to reduce the total moulding cycle time: according to the experimental data, the rotational system with propane gas oven requires a total of 41.4 minutes to inject a kilogram of polyethylene powder, while the Rotofast System only takes 20.41 minutes to process the same quantity of material and produce the part, thus reducing cycle times by about 50%.

The energy efficiency of an Oven Rotomoulding System fed with propane gas is equal to 2.6%, while the Rotofast system reaches 11.6% (corresponding to an energy consumption 4.5 times lower compared to conventional rotomoulding machines). Now that the applied research phase is concluded, the project has entered its dissemination phase. The results obtained made it possible to apply for two European patents: rotomoulding mould and heating method for the mould; rotomoulding machine and method for the production of thermoplastic hollow parts.

The European rotomoulding segment consists of about 400 operators, including small and middle-sized businesses, 80% of which are family-owned and are characterised by low investment capacity. Therefore, rotomoulding still represents a niche sector when compared to other industrial plastic processing technologies: it generates a turnover of about 6 billion euros (considering the whole supply chain), accounting for 2% of the European plastics production. Although it represents a small market, however, stakeholders are showing high interest in this processing technique, since it offers great design flexibility, high part quality and a wide spectrum of application fields, ranging from navigation to interior and urban design, from large containers (trash bins) to tanks and many others.

Another interesting characteristic of this technology is its innovative eco-friendly approach, complying with the European requirements regarding the reduction of environmental impact: it makes it possible to minimise production waste, thus enabling the total recovery of finished products at the end of their life cycle. In addition, plastic parts can be manufactured with thinner walls: this, as a result, reduces their weight as well as the amount of raw material used.[/box]