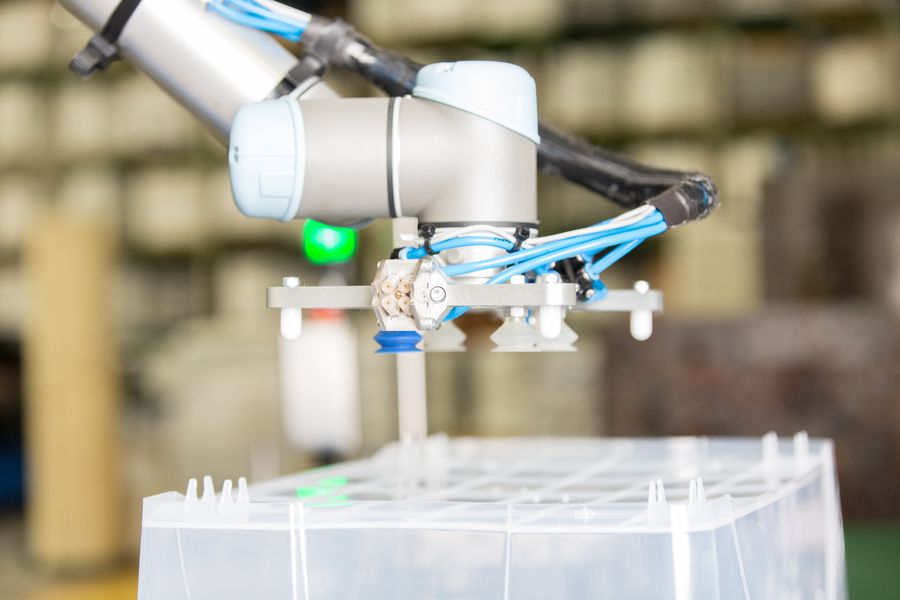 The significant labour costs and geographic isolation of the New Zealand manufacturing industry has meant that in order to compete with international players, local manufacturers must look to innovate with new technologies and automate their production processes. To compete with global manufacturing hubs, leading Auckland based injection molding company, TCI New Zealand (TCI) were looking for an automated solution that would offer a more cost-effective means of producing its customer’s products. TCI found the solution in Universal Robots (Odense, Denmark), a global developer and manufacturer of six axis industrial robots. TCI has now deployed two of Universal Robots’ industrial robotic arms, the UR3 and UR5 to perform labelling and assembly tasks for the company’s EasiYo Yoghurt Maker line, as well as its storage bins.
With a Universal Robot assisting, several key processes in the manufacture of these products have been automated, relieving employees of repetitive assembly processes and ensuring smooth production flow. The UR3 was the first machine implemented by TCI, with the costs of the robot recouped six months after it was first purchased. Satisfied with this return on investment, TCI then decided to purchase the UR5, with the payback period expected to be under 12 months.

Finding a solution
TCI is one of the largest privately owned plastic injection molding companies in New Zealand, based in Avondale, Auckland. For more than 20 years, TCI has manufactured a vast array of products, including building products, components used in instrumentation, navigation, rescue and communications, as well as a range of retail products, including homewares, garden products and outdoor furniture for companies across New Zealand and the rest of the world. «Previously we were paying two employees to work in 12 hour shifts to ensure around-the-clock production of our EasiYo Yoghurt Maker. If one employee didn’t turn up for work it meant the entire production line would be halted. This wasn’t really financially sustainable for us so we were looking for an automated solution that would guarantee quality assurance and help us to reduce costs», said Quintin Fowler, Manager Director at TCI.
During its search for an automation solution, TCI came across Universal Robots’ technology at a trade show and made contact via Design Energy, Universal Robots’ New Zealand distributor. «We developed the layout for the production cell and designed and built an appropriate gripper unit for each of the applications», said Mike Shatford, Managing Director at Design Energy. «TCI then manufactured the machine frames and mounted the various operating units in the relativities we had laid out. Once the machines were completed our technician spent time at TCI writing the robot programs and getting each cell operating to the customers’ requirements».
«Design Energy were fantastic. We were initially considering an off-the-shelf robot from overseas, but I’m glad we were able to find a customisable solution», said Fowler.

UR3 in action
The UR3 is a compact table-top robot that weighs just 11 kg and is capable of handling payloads up to three kilograms. The robot has a reach radius of up to 500 mm and features 360-degree rotation on all wrist joints and infinite rotation on the end joint. It is ideal for manufacturers such as TCI that have limited factory floor space and a number of intricate processes.
TCI uses the UR3 to help label and place rubber feet on its EasiYo Yoghurt Makers. After a product is molded, the UR3 aligns and passes the product though a label printer, then it adheres the label to the base of the product. The UR3 then inverts and places the product onto a mandrel, then picks up rubber feet from a bowl feeder and places them on the base of the product. A pneumatic press is then activated, which presses the feet firmly on the product. The UR3 then picks up the finished assembly and places it on a conveyer belt for delivery to the next process. The UR3’s controller provides control for all ancillary equipment including the label printer, bowl feeder, pneumatic press and conveyor.

UR5 in action
The UR5 helps manufacturers automate repetitive and dangerous tasks with payloads up to five kilograms and a reach radius of up to 850 mm. The UR5 is suitable for collaborative processes such as picking, placing and testing. The success of UR3 gave TCI the confidence to implement a Universal Robots’ UR5 robot to help assemble several different sizes of storage bins, from 40L up to 112L.
«We use the UR5 to put wheels on storage bins and we programmed the robots to be able to place wheels on multiple sized storage bins. The robots are so easy-to-program that we can quickly change from one size to the next by pressing just a few buttons», said Fowler.

Flexible
Fowler noted: «Both the UR3 and UR5 went beyond our expectations in what we were looking for in a robot. These robots have the ability to perform the tasks that we need without being overly expensive or difficult to program. They also offered a quick return on our investment. Universal Robots’ robots can easily move around and fold over on themselves in very tight spaces. The robot can also operate safely alongside our staff without the need for guarding».

Easy to program
All UR robots can be completely reprogrammed and deployed for other tasks in a matter of minutes. A graphical user interface with a teach function enables an operator to simply grab the robot arm and show it how a movement should be performed. The user-friendly interface then allows staff to drag and drop the routines to do their programming.
«The UR3 and UR5 are very flexible robots. They are very easy to reprogram, which is why we use the UR5 to help assemble all of our storage bins. The robot can be reset to perform different jobs depending on the size of the bin», said Fowler.

Safe to use
In contrast to traditional industrial robots in the market, Universal Robots’ small and lightweight robotic arms are able to work safely alongside staff (subject to prior risk assessment). The robots’ state-of-the-art force limit safety feature automatically stops the robot from operating when its movement is obstructed. The robot will not exert a force greater than the limit specified in the adjustable safety settings.
«One thing I loved about Universal Robots was that we didn’t have to worry about guarding. Whereas a lot of the other robots in the market guarding was an issue because you’d have to use safety barriers for all the machines which just complicates the situation», said Fowler.

The pay-off
According to TCI, the company has been able to significantly reduce expenditure by using robots at a time when labour costs can be 10 to 20 times higher that of other overseas markets. «We paid off the UR3 within six months, which means we can reinvest in further product development and innovation. We also saved around 75 percent on yearly product assembly labour costs for the UR3 and UR5», said Fowler.
When asked what appealed to him the most about the UR3 and UR5 robots, Fowler pointed to their simple programming and consistency. «The robots are easy to set up and reprogramming can take just a few minutes. However one of the biggest selling points for us is having that guarantee that the robots aren’t going to call in sick – production can go on 24/7 without us worrying about human related factors that might stop production».