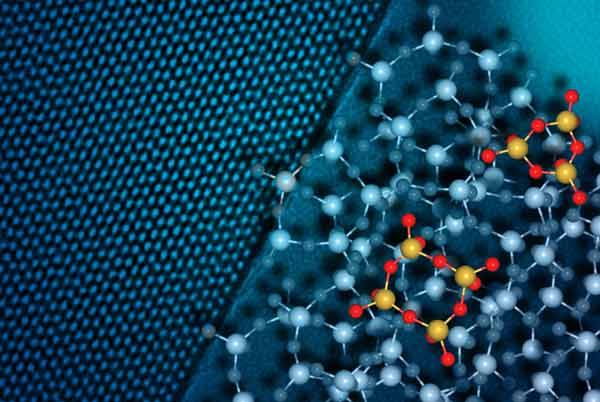 Heterogeneous photocatalytic degradation of various kinds of organic pollutants using semiconductor powders (titanium dioxide, the common one) as photocatalysts has been extensively studied since the increasing environmental pollution creates a pressing need for new advanced solutions. Since under room temperature and air pressure, the organic pollutants could be completely degraded into carbon dioxide (CO2), water and other mineral acids by the photocatalysis method, some scholars predicted that in the near future the photocatalysis method will become one of the most effective means in dealing with various kinds of industrial wastewater as well as air purification. The principle is based on the generation of photoholes by ultraviolet irradiation and the subsequent generation of OH radicals, caused by reactions with hydroxyl groups adsorbed onto the hydrophilic titania surface. These OH• radicals play a key role in the oxidation of organic compounds. Within this outline, a challenging task looks at the study, the production, the process optimization and the photocatalytic performances testing of multistructured membranes based on electrospun fibers and electrosprayed nanoparticles.

The manufacturing process, based on electro-dynamic technologies (electrospinning, electrospray), represents a versatile tool for obtaining different membranes assemblies and then it results on a final product which exploits the synergic properties of both nanofibers and nanoparticles. Because of this the obtained nanostructured membranes have a huge potential for soft-furnishing and drapery industry, as advanced textiles, since they are able to perform a double action: first a physical removal of small particles (thanks to the filtration activity of the electrospun nonwoven web) and then a photo-oxidative degradation of the chemicals which are responsible of indoor pollution.

Particularly, photocatalytic degradation of volatile organic compounds (VOCs) is gaining more and more interest, since the emission of these compounds contributes to environmental problems, such as tropospheric ozone formation, stratospheric ozone layer depletion and global warming. Moreover, many VOCs are toxic, carcinogenic, and can cause serious odour nuisance.

Within this outline, it has been implemented the processing of multilayers membrane by the combination of electrospinning and electrospraying techniques, and therefore based on electrospun polymer nanofibers and elecrosprayed nanoparticles with new synergic properties. The high value of the membrane is strictly connected to the innovative technologies employed as well as to the ability of choosing the layers of the manufactured membrane, resulting on the whole structure flexibility which can be correlated to the specific requirements of the target range. In order to have a better understanding of what we are talking about, let’s think to a “sandwich” where very thin fibers, with a mean diameter of a millionth of a millimetre, support small particles well distributed and fixed over their surface. The resulting multifunctional nanomaterials will add value, improve performance and cost in various applications.

The tweak of the process-product system has been carried out at the Department of Chemical Process Engineering, University of Padua, Italy, where equipment with proper design has been developed and the scaling up to semi-industrial production as well as the laboratory tests for product characterization and evaluation of the the photocatalytic performances is ongoing for ensuring reproducible operating conditions and to monitor the degradation reactions.Looking at the structure (figure 1), the titanium dioxide (TiO2) nanoparticles are uniformly spread over the electrospun fibers surface (typically thermoplastic polyurethane, TPU, or polyacrylonitrile copolymers) and a macroscopic view of the final multistructured membrane is reported in figure 2.

As regards the performances, the obtained nanostructured membranes show a lower pressure drop if compared to the neat ones (10-20% lower than the benchmark, according to the increased nanoparticles amount), thanks to the nanoparticles content. Moreover, they reveal antibacterial activity (biological tests) and their photocatalytic activity has been proved on phenol degradation (liquid phase, 61% degraded within 13 hours) trichloroethylene (305 ppm TCE oxidized per g TiO2 in 1 hour) and acetone (171 ppm oxidized per gTiO2 in 1 hour).

Looking in details at TCE photo-oxidation, all the obtained data are then normalized with respect to 1 gram of catalyst, electrosprayed with a final density 0.0023-0.0037 gr/cm2, a TCE initial concentration of 450 ppm in the volume reactor of 770 cm3. Dichloroacetyl chloride (DCAC) and phosgene have been shown to be the main organic intermediates while CO2, CO, HCl and Cl2 are some other inorganic products of complete TCE oxidization and a representative scenario of TCE, DCAC, phosgene and CO2 under photocatalysis is shown in figure 3. As concerns the second tested pollutant, acetone, the scenario of its concentration trend and CO2 under photocatalysis is plotted in figure 4. All the recorded data are normalized with respect to 1 gram of catalyst and it has been found to be 0.131 cm3 of oxidized acetone per gram of TiO2 catalyst, i.e. 171 ppm acetone per gram of TiO2. This result is the evidence that the photocatalysis performed in the aforementioned conditions is more efficient for TCE, even if its mechanism of degradation is multi-step and it chemical structure is definitely more complex than acetone.

Looking at acetone concentration, it has been observed an exponential decay till a pseudo constant value has reached. It should be emphasized that the acetone conversion is not followed by an instant formation of CO2 and this results means the CO2 increase has a delay in analyte detection. In order to explain this behaviour it is necessary to take a look at the heterogeneous catalysis steps and in particular at the rate-limiting step, which could be the degradation reaction as well as the desorption rate of the analytes. The temperature dependence of these steps could be useful to understand which is the rate limiting step. Moreover the absence of intermediates during the degradation suggested the simple mechanism of complete mineralization of acetone to CO2 and water.

Thanks to these promising results we can say that this kind of nanostructured membrane represent a good candidate for self-cleaning fabrics because they show multiple properties all together that makes them very attractive for the advanced textile market.
The innovative character of these products can be also depicted on the versatility of the multifunctional structures which can be designed according to the specific requirements of the target. Brethability, waterproof, selective permeability, antibacterial, antiodor activities, and the ability to oxidize volatile organic compounds are just few properties that be tailored on the developed lightweight fabrics.

[box title=”The production technology” color=”#f8911b”]Spinning technologies have been rediscovered since nineties as a versatile and economic tool for manufacturing micro- and nanoscale architectures. These structures can be a good candidate in a wide range of applications such as membrane technologies, reinforced materials, textiles, catalysis, sensors and biomedical field. The main advantage of these techniques is the ability to process a vast array of inorganic, hybrid materials, and organic polymers in order to tailor the best and suitable result to the specific application you deal with.

An other advantage that makes these techniques more and more promising is the ability to form various fibre assemblies as suggested in the literature. Both the electrospraying and electrospinning processes are driven by the application of a relatively high voltage applied to a fed solution with respect to a grounded substrate, a key difference being that the electrospinning jet can be essentially thought as a string of charged elements connected by a viscoelastic medium, where the chain entanglements are enough to stabilize the initial jet against break-up into droplets. Several forces play a role during electrospray, the coulombic, electric field, viscoelastic, surface tension, air drag and gravitational forces, respectively. In the conventional view, when the voltage overcomes a threshold value depending on the specific system, electrostatic charging of the fluid at the tip of a nozzle results in the formation of the well-know Taylor cone, from the apex of which a single fluid jet is ejected. The jet moves towards a ground plate acting as counter electrode and it is affected by different instabilities (Rayleigh instability, bending instability) due to electrical effects and surface charge density influence.
On the other hand, nanoparticles and nanoparticle systems play an important role in the recent explosive nanoscience research initiatives. One of the main objectives of nanoscience research is to develop novel synthesis routes that produce nanoparticles with controlled sizes and shapes. For example, it is critical to control the size and the shape of the metal, alloy or oxide nanoparticles in order to develop nanostructured heterogeneous catalysts with desired performances, as well as alternative electrodes for dye-sensitized solar cells.[/box]