A new generation of polymers transmits light homogenously, eliminating once and for all the unsightly hot spots typical of LED lamps

One of the problems associated with LED lamps is the unpleasant hot spot effect typically generated by these fixtures. To correct this, the Maip Group (Settimo Torinese, Turin, Italy) has recently developed Harmon(i)a, a family of thermoplastic compound additives with special reflecting microparticles free from titanium dioxide which make the material more efficient from a lighting standpoint and more resistant to photodegradation. The diffusing components are self-reflecting spherical particles, which are invisibly embedded into the polymer.

The alternatives generally used to eliminate hot spots are mould finishes for the production of parts for LED lamps and the use of opaline materials. Experience has demonstrated the partial ineffectiveness of the first alternative, while the opaline resins are a decent solution, but have the drawback of blocking a good part of light transmission. In addition, as titanium dioxide has the intrinsic property of filtering the UV component in solar radiation and in fluorescent lamps, traditional opaline resins are particularly susceptible to the phenomenon of yellowing.

Harmon(i)a, on the other hand, in addition to correcting the hot spot effect, provides greater resistance to photodegradation and photo-oxidation yellowing, and even permits the frost effect on shiny finish moulds, avoiding duplication of the mould. The environmental implications are also notable: the new engineering polymer could promote the acceptance of LED sources, contributing to improving energy efficiency and visual comfort. Lastly, it would permit the harmonious combination of optical and physical components with the lamp structure, optimising light efficiency compared to traditional solutions.

PMMA, PC and other polymers

The main materials available today are based on polymethylmethacrylate (PMMA) and polycarbonate (PC), although the same effects can be obtained on all transparent polymers: the revolutionary super-flexible acrylic resins (illflex), ABS (MABS), polycarbonates for high temperature applications (APEC), amorphous polyamides and copolyesters (PETG).

The PMMA based grades stand out for their optical and UV resistant properties, while the PC grades are particularly suited for applications requiring greater resilience and superior thermal properties. The mechanical, rheological and thermal values vary depending on the polymer grade used as base material. The Harmon(i)a is also available in a self-extinguishing version, like PCV-0, and spot coloured. All these polymers are easily processed through moulding and extrusion technologies with great design and use flexibility.

Experimental tests on smooth and fine satin-finished moulds have been carried out to evaluate the performance of Harmon(i)a. The tests revealed that, as opposed to polymers where embossing significantly affects transmittance, the values of reflecting polymers are very similar for both finishes. In addition to this, the degree of gloss diminishes, despite the mould being mirror polished (for example, for PMMA, gloss at 23 °C falls from 106 to 56), and a normal satin finish reinforces the matt effect taking it to 9, while a specific matt finish might reduce it to 2-2.5. The percentage of additional micropearls influences the colorimetric coordinates, a variable that is also affected by the presence of other additives. 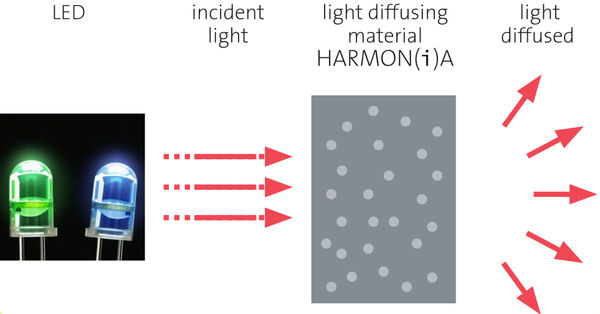 The Haze value for the various grades ranges from 90 percent to 99.8 percent, corresponding to the very high diffusion value of the material. The micropearl content also affects transmittance, which diminishes as the percentage of particles incorporated into the compound increases; despite this, the value is always much higher in the majority of grades. In addition, as transmittance is defined as the fraction of incident light which, on a given wavelength, passes through a sample, it assumes different values depending on the wavelength at which it is measured. Even the presence of additives as optical whiteners, UV stabilizers, colours and so on influences transmittance, and therefore also the covering power, which is in turn linked to the thickness of the piece. UV-stabilized grades are used exclusively for exterior applications, because LED light sources do not emit UV rays.

From lighting technology to cars

Diffusing polymers are a great novelty for the lighting sector, which is currently going through great changes in technical standards and technology. On the one hand, the EuP directive has, in the name of energy saving, banned traditional incandescent bulbs, and with it the concept of opalescence of filament light sources. On the other hand, LED lamps are becoming established as the new approach to everyday lighting, in as much as they are devices that not only guarantee control on light intensity, but also on colour temperature.

LED light sources are also protagonists in the automotive industry, where research into energy saving solutions has become a major aspect especially in the field of  electric vehicles. As regards other fundamental aspects for this industry, design is being driven by the possibilities offered by recent technological developments. For example, numerous applications have already been conceived for car interiors – centre consoles, instrumentation, switches and electric controls – drawing on the potential of LED lighting. The most recent trend is to hide the highest number of LED lights in panels, and in this context diffusing polymers might represent an interesting possibility, guaranteeing superior diffusion without affecting the optical properties of the diffusers.

Today, the technologies traditionally used in production vary from the two-component system – where a diffusing material is overmoulded with a covering material – to in-mould decoration (IMD) for the production of black panels. In the latter case, the panel is completely black and the various commands are back-lit, appearing only when the car lights are turned on. A recently developed alternative technology involves the use of Harmon(i)a in the production of light diffusers and the combination between a rigid support and a black polycarbonate front film.

An alternative to painting and plating

The work of the Maip Group in the lighting sector is also concentrated on innovative grades to limit light dispersion from LED sources, while maintaining high surface reflectance values. In optics, reflectance indicates the proportion of incident light that a given surface can reflect. It is the ratio between the intensity of the reflected radiant flow and the intensity of the incident radiant flow. It is an adimensional parameter. The h(i)lite resins guarantee very high reflection values (approximately 94% in some grades) through diffused and homogenous reflection. The optimal reflection properties combine with the design flexibility of thermoplastics and permit the development of original applications. These polymers are an alternative to traditional painting, with a consequent reduction in processing costs and benefits for the environment.

The Hel(i)os line is made up of polymers that change colour when they are exposed to UV rays or sunlight, returning to their achromatic state after exposure. The choice of pigments is rather vast, as the majority of those available on the market show good thermal resistance during compounding. The desirable property of these pigments is a fast transition between these two states.

Eye glass lenses that darken in the sun and lose the colour in indoor spaces is the best known application of photochromism, but there are numerous applications. Fluid and petrol markers, security inks, cosmetics, fashion, nanotechnology in electronics for data storage, packaging and toys.