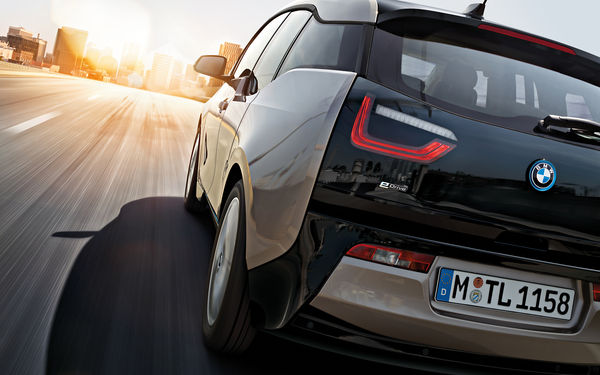 All the secrets of the new BMW i3, the first electric car designed for mass production

The revolution of the electrical car could be underway in Germany, more precisely in Leipzig, the town selected by BMW as the site for one of the most modern vehicle production facilities. Over the next few months, it will make thousands of BMW i3 models, the first electric vehicle with mass production ambitions. This model is innovative also for the massive use of carbon-fibre reinforced plastics previously experimented only on supercars, few models of which are made each year and sold at a high price.

BMW, the German auto maker, is aiming high. Four facilities (three in Germany and one in the United States) are involved in the BMW i3 project to make the advanced materials alone, with investments already running into hundreds of millions of euro. The manufacturing process starts with the carbon fibre, produced as part of a joint venture agreement with SGL at the American facility in Moses Lake. The fibre is then “woven”, impregnated, shaped and overmoulded using modern techniques to make the body and other structural components. Other thermoplastic parts are used for the seats, interiors and body panels, further reducing the weight of the vehicle while ensuring greater range, pickup and performance, without compromising on safety.

Less than four metres long with a width of 1,775 millimetres, the new BMW i3 is a compact car that comfortably seats four, exclusively powered with electricity. To guarantee adequate performance (170 CV, acceleration from 0 to 100 km/h in just 7.2 seconds) and sufficient range (officially 130-160 kilometres) for urban use the designers are relying on the lightweight chassis to compensate for the greater weight of the lithium ion batteries. The result is a Kerb weight of just 1,195 kilograms, equivalent to a conventional car with a full tank.

The secret is the horizontally split LifeDrive structure, with two separate, independent modules. The lower aluminium Drive module, the proper chassis, incorporates the battery, drive system and powertrain parts. The upper Life module is a passenger compartment consisting mainly of a high-strength, ultra-lightweight carbon-fibre reinforced plastic (CFRP), certainly the most innovative section of the project, even with regard to the manufacturing technology.

The passenger compartment comprises around 150 CFRP parts, a third of the number required for conventional sheet-metal architecture, while weight has also been reduced by a third. The latest bonding technology, 100 percent automated, is used to assemble the various components produced in different plants, developed by BMW to reduce idle times and, at the same time, guarantee the levels of precision and reliability demanded by the most stringent vehicle standards. The use of CFRP has also permitted strut B to be eliminated (the one that separates the doors), making passenger access easier. And not only: the passenger compartment architecture makes for a glass and glassfibre-reinforced plastic tailgate which, compared to the conventional sheet-metal solution, has reduced the weight by as much as 30 percent.

The carbon structure, part of which is visible when the doors are opened, serves as an aesthetic connecting element between the interior and exterior, mainly made from thermoplastic materials.

The choice of unusual materials for the vehicle extends also to the interiors, where a combination of leather, kenaf fibre for the door trim panels and natural wool, combined with synthetic materials, and 25 percent of the interior is made from recycle materials or renewable raw materials. As an additional weight-reducing measure, the BMW i3 is fitted with lightweight seats featuring extremely slim backrests. A bearing structure of magnesium was, on the other hand, used for the instrument panel, with supports in kenaf fibre: not only does it weight 20 percent less than a conventional steel panel, it also reduces the number of components, and cuts weight by a further 10 percent.

Lightweight and passive safety cannot always coexist, but composite materials, thanks to their intrinsic rigidity, deliver a good compromise, thanks in part to the special design. In the event of impact at a speed of 64 km/h – according to the German carmaker – the composite compartment maintains an intact survival space for passengers An additional level of safety is delivered by the aluminium crash structures in the front and rear of the Drive module, designed to absorb the force of the impact.

On the whole, according to BMW engineers, deformation of the body in an impact is actually less than for comparable sheet-steel body. «In a pole impact and side impact, the CFRP body demonstrates excellent energy-absorbing capabilities – BMW says –. Despite the high impact forces and the fact that they are concentrated in relatively small areas, the material suffers only minor deformation». In addition, even after front or rear impact, the CFRP body remains intact and the doors can be opened without any problem, facilitating the process of rescuing occupants.

It all starts with the fibre

In the BMW i project – which in the future will give life to new electric and hybrid vehicles – in addition to vehicle technology, also the production process organisation is interesting, as it is distributed throughout a number of facilities, with a radical depart from traditional car making organisational models. Considering production volumes, the German constructor has wanted to establish full control over the manufacturing process, starting from the carbon fibre. With the exception of the lithium ion battery, purchased from a specialist manufacturer, the entire development and production process is managed in-house.

As far as composites are concerned, it all starts with the carbon fibre, produced at an American plant (Moses Lake) set up in 2011 as part of a joint-venture with SGL Group. At a cost of 72 million euro, the plant has two production lines, each of which have a capacity of 1,500 tons a year. Though the new cars are not yet in production, the American plant already accounts for around 10 percent of global CFRP production today.

The precursor material is used to make a polyacrylonitrile-based fibre, from which a thin fibre is obtained (7 microns, or 0.007 millimetres) composed almost exclusively of pure carbon with a stable graphite matrix. Approximately 50,000 of these filaments are bundled into rovings (heavy tows) and wound on reels for the next production stage, which takes place in Germany. The fibre is processed and impregnated at the Wackersdorf facility, also managed in partnership with SGL for an investment of 20 million euro.

The semifinished parts are then processed into CFRP body parts before their final assembly. Part of the production takes place in the Landshut plant, in Bavaria, where CFRP roofs for the BMW M3 and M6 models have already been in production on an industrial scale for some time. Following an investment of 40 million euros last year, the site is now the key innovation and production centre for CFRP components, earning it the “JEC Europe Innovation Award 2013”. It manufactures carbon components for the Life module, some moulded plastic parts for the body and extruded components.

Some pieces are also produced in Leipzig, using the resin transfer moulding technique (RTM). The mats are first heated, then preformed and assembled in larger structures and, lastly, overmoulded with resin before a clamping force of up to 4,500 tons is applied. The process developed by BMW eliminates the post-moulding autoclave stage, making it faster and more cost-efficient.

The final assembly of the vehicle also takes place in Leipzig. During this stage, the coloured plastic body panels are fastened to the Life module using special hidden supports.

The powertrain components are also made by BMW: the plant at Dingolfing, in Bavaria, produces the battery, the transmission, and the Drive module’s aluminium structure.

Some parts are made in Italy

BMW has disclosed some general information on production processes, but it has not been particularly forthcoming when it comes to the technology used at the new BMW i3 plants, or its suppliers. It is understandable, considering the innovative content of plastic and composite process technologies. However, some details have emerged.

The Austrian manufacturer Engel, for example, has supplied tandem injection moulding cells for the production of lightweight components, with presses fitted with the ecodrive energy saving package, complete with moulds, control system and robots. The double-platen injection presses of the duo range have clamping forces of between 2,700 and 4,000 tons, installed in tandem configuration back-to-back to ensure the correct cycle phasing (in master/slave mode), and produce simultaneously two body parts to be assembled successively. This way the parts have the same quality characteristics and identical post-moulding aging, guaranteeing optimal quality and uniform parts.

Italian technology has also been used in the production of the BMW i3. According to leaked information, about a dozen moulds for body parts were made by Italian companies in Milan and Varese. In addition, the Italian company Piovan has supplied BMW with its Modula multi-hopper drying systems for pellets, in addition to Varyo self-regulating vacuum conveyor systems, the MDW gravimetric blenders and the Winfactory monitoring software. The company was awarded the order after a trial and testing period lasting six months, during which different systems were compared in relation to their efficiency, energy saving, self-adaption and stable process conditions.

Sustainability at every stage, including production

In designing the Leipzig plant, BMW wanted to extend the concepts of sustainability that distinguish the new car: the plant consumes about 50 percent less energy and around 70 percent less water in comparison with current average figures for production. Likewise, all of the energy used in carbon fibre production in Moses Lake is entirely derived from renewable, locally generated hydroelectric power.

The German manufacturer has also developed sorting and recycling processes for composite scrap (fibre prior to impregnation, cut-outs, etc.), as well as moulded parts.

For example, dry carbon offcuts are reused to make non-woven fabrics which can be reintroduced into the production process. Secondary (recycled) material therefore accounts for around 10 percent of the carbon fibre used in the production of BMW i3. When this is not possible, the fibres are separated from the resin by pyrolysis. The CFRP resins or grinded or resized carbon can be reused in different applications, not necessarily in the automotive industry: for example, in the textile or electronic industry, to produce the casings of control units.

Coming soon on the market

The new BMW i3 will be available before the end of the year for a price that in Italy should be approximately 36,000 euro, rising to little short of 40,000 euro for the Range Extender version, the latter fitted with a small petrol engine which recharges the battery for longer distances. A cost which, if backed by incentives and proper subsidies, makes this technology – previously reserved for a select few – affordable on a mass scale for anyone who has a socket where they can plug it in.