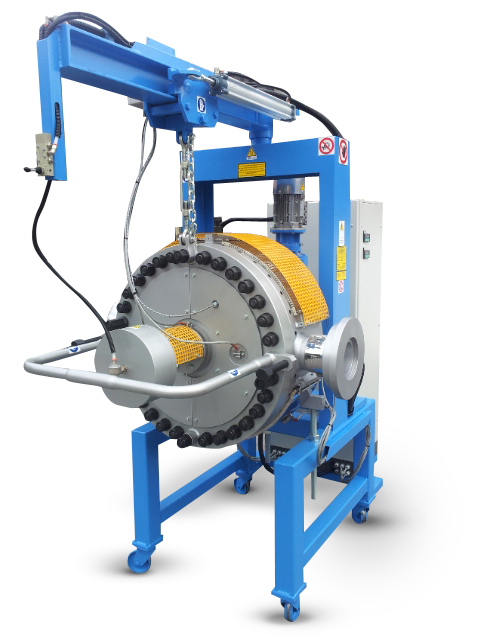 The latest addition to Fimic’s production programme is a continuous automatic self-cleaning screen changer that enlarges the existing range of machines, already including models from 325 to 600 millimeters

Concepts such as recycling and sustainability are making inroads among consumers and, consequently, among industry insiders. It is a point in favour of those who, like Fimic (Carmignano di Brenta, Italy), have decided to develop machines capable of processing huge quantities of materials contaminated with foreign material and dirt. «There is no doubt that the increased use of recycled plastic is something good – says Antonio Canaia, owner of Fimic –. Yet it is equally clear that this trend is driven by the need to reduce production costs. Hence the strategic choice, which is no longer a novelty, to propose reliable technologies ensuring a good quality-price ratio».

In line with these requirements is the recent release on the market (the first unit was delivered just last May) of a new automatic self-cleaning screen changer for plastics processing machines: the Fimic 700 model, which expands the production programme of the company in this field maximizing the screen surface. The new model operates in the scraping or backflush mode and is available in a number of different versions: from the smallest one (the 325) for output rates of 500-800 kg/h to the largest (the 600) with a capacity of up to 4,000 kg/h.

The mod. 700 is the result of a “field” project developed in direct cooperation with a customer who had already purchased three systems supplied by Fimic with an overall output capacity of 60,000 kg/h.

1 keeps pressure low and does not modify the material

2 minimal rejects: 1-2% in the scraping mode; 5% in the backflush mode

The customer’s need was that of changing one in-line screen with a larger one. «In these difficult times, the demand for a system targeted to increase production and improve the process amazed us – Antonio Canaia goes on –. In order to meet this demand we designed a machine with a larger surface, though maintaining the same advantages ensured by smaller screen changers. First of all, the operating costs, which are kept at a relatively low level also for screens and scrapers. These screens, made of special metal plate, can be disposed of at the end of their life and replaced with new ones avoiding expensive cleaning and recovery operations. In addition, the replacement intervention takes only half an hour. This is the only bottleneck in the production flow, since the automatic management of screen changers allow the user to work nonstop».

Within the production flow, the automatic self-cleaning screen changer is placed between the extruder and the cutter. Inside the housing of the screen changer, a scraper acting on a perforated metal plate expels under pressure the dirt mixed up with the plastic material, especially if this is contaminated with metallic scrap and other foreign matter, while the clean resin can pass over to the next process step on the machine. As dirt gradually clogs the screen, the pressure increases until a threshold limit is reached which is detected by a special control instrument, as a result activating the scraper holder. The scraper holder, which incorporates two interchangeable scrapers made of steel, is then lifted by a rod, removing and discharging the dirt from the perforated metal plate.

This operation mode is the most widely used, although, depending on the manufacturer’s requirements, the unit is also able to remove dirt from the screen with timed expulsion of contaminants by means of a timer. In this case, the scraper holder rotates steadily, cleaning up the plate without interruptions in order to achieve a continuous process in the presence of materials with very high concentrations of dirt or of a system that requires a constant operating pressure. The screens are made of punched AISI 304 steel alloy subjected to two hardening processes for extra strength. Depending on the use and the material being processed, but especially on the degree of contamination, the screens can be replaced one to three times a week.

All models of the same screen changer can however operate in backflush mode, using a steel mesh selected according to the filtration degree necessary to “clean” less contaminated materials. In this case it is possible to achieve a filtration performance in the range from 60 to 300 micron.

Antonio Canaia, owner of Fimic, looks with satisfaction at the accomplishments of his company at a time that is certainly not easy for the sector and more generally for the Italian industry. This satisfaction is due to the company growth in contrast with the current market situation. «We know – he explains – that very few companies have not suffered from the effects of the current crisis. Over these years we have always tried to meet the needs of both established and potential customers, and we were not satisfied with just trying to cope with the situation as good as we can. On the contrary, we have strengthened our investments in research and development, being aware of the fact that the sector has been going through a stagnation period and a growing concentration. This has led to the demand for larger machines for large-scale production runs. We have followed this trend, adapting to the changes, and the results proved us right. In this moment, the new model 700 is our front-line product, but we are already working on projects involving construction materials, looking forward to introducing other innovations soon».

The forecast for 2013 are also optimistic. «I’m convinced that the expansion of our production programme will allow us to close this year with positive results, also thanks to the new models, including two screen changers in tandem configuration, allowing alternate change without any downtime» Canaia concludes.[/box]