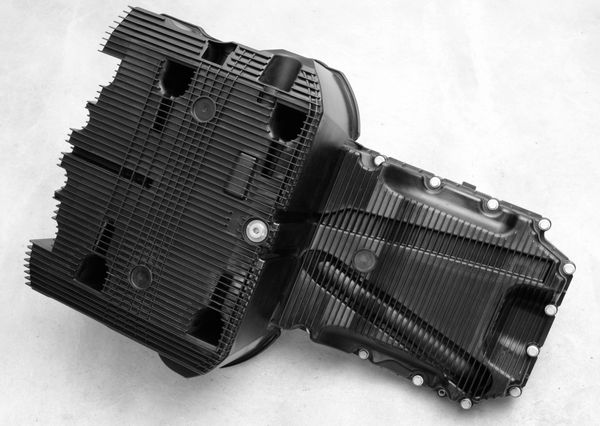 «From 2013/2014, the Euro 6 emissions standard will launch a new generation of engines onto the roads; it imposes the same kind of strict emission limits for diesel as for petrol engines. This is why manufacturers are not only focusing on efficiently reducing exhaust gases, but also on lowering fuel consumption. With this in mind, they are pinpointing lighter-weight components in particular. The trend is towards oil pans made of polyamide 6.6 with a glass fibre content of 35 percent», said Klaus Bendl, Head of R&D, Elastomer Technology /Modules Division at ElringKlinger AG, Dettingen/Erms, Germany.

As a trend-setter in the transition to plastics for large oil pan mouldings, ElringKlinger selected a heat stabilized, lubricated grade of Zytel® by DuPont polyamide, following four years of prototype production and more than 3,000 hours of endurance testing.

«There is also a significant improvement in acoustics – a 2dB reduction in noise level is much more than that achieved with competing products», says Bendl, citing another advantage that plastics have over metals by helping to make engines quieter, in compliance with Euro 6 noise emission standards.

The company has succeeded in meeting those tough performance demands by commercializing two large but lightweight oil pan modules of Zytel for new Mercedes-Benz 4 and 6-cylinder diesel engines. They weigh only 4.5 kg and 6.3 kg respectively — up to 50 percent lighter than their aluminium predecessors — and contribute to improved fuel economy and reduced emissions.