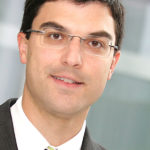 Engel has appointed Stefan Engleder as head of technology and production at Engel Holding. He worked in technical roles in Germany and Canada before joining Engel in 2008, initially with the task of developing and launching the company’s viper robot range. Prior to his appointment to the current role he was Factory Manager at Engel Automatisierungstechnik in Dietach.

Stefan Engleder, like CEO Peter Neumann, is part of the family that owns Engel Group.