In Italy the volume of converted virgin resins and compounds has fallen at the levels of two years ago, losing all the 20,000 tons gained in 2017

For some years now, Italian consumption levels of PVC, in particular the virgin resin, have been quite stable at around 650,000 tons a year – a volume far from the 970,000 tons of the all-time record of 2007. And exactly this was last year’s PVC consumption figure reported by the Milan-based market research company Plastic Consult on behalf of PVC Forum Italia, or 20,000 tons less compared to the figure recorded in 2017, and at the same level of 2016.

Taking the five-year period 2013-2018 as a reference, consumption figures showed a broadly flat trend of +0.7%. This trend is similar to that of thermoplastic resins as a whole, which in 2018 recorded a slight decline compared to 2017, when a recovery of the market gave also hope for a pick up in consumption. With regard to converted resin volumes, the actual amounts of PVC may be slightly higher when taking into account recycled post-consumer material that re-entered the production cycle (not covered by the research study) which however should not change the overall results very much. The total volume is almost evenly divided between rigid PVC (324,000 tons) and thermoplastic PVC (326,000 tons), a third of which was converted into compounds (222,000 tons). Moving on to the main application segments, in 2018 the building industry accounted for 207,500 tons of virgin PVC, followed by packaging (79,500 tons), cables and electrical material (60,000 tons), and at a distance furniture and furnishings, paper converting and leisure. Special reference also needs to be made to the compounding of virgin PVC, which last year reached 222,000 tons, a few points less than the previous year, but up 3.2% over the five-year period. 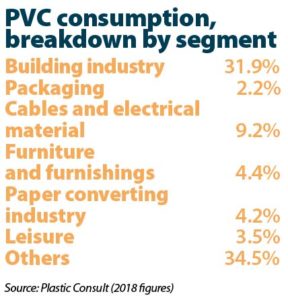 The progress of PVC recycling
The European PVC industry is meeting the voluntary commitment to the environment made in 2011 with the VinylPlus programme, which set for PVC the ambitious target of 800,000 tons/year to be recycled by 2020, rising to 900,000 by 2025 and then to one million tons in 2030. A demanding – but not impossible – goal, because according to the statistics released before this summer during the VinylPlus Sustainability Forum, the first target has been virtually achieved: in fact in 2018, 739,525 tons of PVC waste were recycled in Europe, 15.6% more than in 2017. The Recovinyl programme, with 734,568 tons recovered, made a significant contribution to PVC recycling last year. However, the main contribution came from the doors and windows sector, with 326,276 tons (44% of the total), thanks to the contribution of EPPA, the European association of the manufacturers of PVC window profiles and related products. The second largest contribution came from the film and flexible packaging sector with 167,148 tons, followed by electrical cables with 151,506 tons and pipes and fittings with 82,635 tons. The rest is divided between PVC coated fabrics (9,573 tons) and floorings (2,387 tons).

Stable, but flows are changing

In a general scenario in Italy that has seen a substantial stability in the consumption figures of virgin plastics in 2018, with a slight decrease trend (-1%), the 1,000-ton growth in the deliveries of sintered expanded polystyrene (EPS), from 119,000 to 120,000 tons, testifies to the resilience of this sector despite the environmental challenges. The figures, based on a research study by the Milan-based company Plastic Consult, were presented, as usual, by the Italian association of expanded polystyrene (AIPE).

Preforms up and slabs down

While the overall situation is positive and seemingly stable, there are diverging trends within the sector: the preformat segment shows better performance (from 60,000 to 64,000 tons) compared to slabs and boards (down from 54,000 to 52,000 tons) confirming the shift in demand towards more technological and performance-specific products which have been in place for some years now. The bulk EPS beads segment, which is broadly stable at 4,000-5,000 tons, remains marginal compared to the other two. 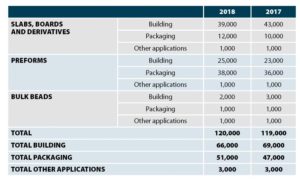 Consumption grow in the packaging segment

The same trend can be seen in EPS consumption by application. The growth of the packaging segment (from 47,000 to 51,000 tons) was in fact almost offset by a decline in insulation materials for the building industry, which in 2018 fell to 66,000 tons from the 69,000 tons recorded in 2017. The difference is precisely the 1,000 tons surplus of the year.

“Despite the media attacking single-use packaging, the demand continues to grow at present” Giorgio Pigozzo

Despite the media attacking single-use packaging, which perhaps could penalise EPS more than other plastics, the demand continues to grow at present. According to AIPE, this is explained by the fact that EPS packagings offer technical performance that makes them a valid and virtually irreplaceable choice, especially in terms of temperature control, impact protection, safety for food contact applications.

The decline in consumption in the building industry, on the other hand, does not seem to be linked to the competition of other insulating materials, but to the current crisis that pervades the building industry in Italy, which is struggling mainly in the residential and new building segments.

AIPE in the circular economy platform
As a recognition of its commitment to promoting the recovery and recycling of EPS, AIPE recently became member of the Italian Circular Economy Stakeholder Platform (ICESP) launched last year by Enea. In the framework of the wider European ECESP platform, it will promote and coordinate activities related to circular economy taking place in Italy, providing a forum for discussions and proposals. ICEPS’ members include the representatives of institutions and public authorities, citizens and the third sector, companies and trade associations, training and research institutes. The tools are the website (www.iceps.it), regular consultations and working groups.

Mold & dies: the importance of reshoring