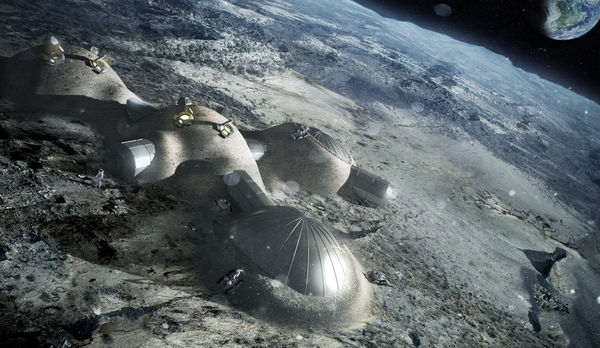 Engineering polymers are widely used in the aerospace industry because they are lightweight, versatile and hard-wearing. From compounds reinforced with fibres and carbon or Kevlar nanotubes to engineered foams for thermal insulation, the range of materials used is wide and diversified and often originate in space research facilities. However, when solutions are required to launch a rocket into space across cosmic distances to explore or colonise new planets, we need not only high performance materials, but also technologies able to produce or recycle them in environments, conditions and physical parameters very different from our own. And this can lead to a few problems.

This is anything but a theoretical issue. One of the primary frontiers of space exploration is the creation of a station on the Moon, which could then be used as a launching pad for more long range missions. But transporting the necessary materials for its construction from Earth would be impractical and very costly, so much so that researchers are looking for ways to use raw materials already available on the Moon itself.

One of the more promising projects is a partnership between scientists from the European Space Agency (ESA) and architects from the London based firm Foster+Partners. The idea, seemingly inspired by science fiction, is to use 3D printing technology – already being used experimentally on Earth to product large architectural components – to create the structural parts of the base using lunar rocks and dust that have been appropriately modified with additives. The project Foster & Partners are working on has a catenary type overhead load-bearing structure for the dome and closed-cell hollow walls, thus creating a good balance between weight and mechanical strength. This structure would have to provide protection from micro-meteorites and cosmic radiation, while the actual living area for astronauts would consist of a pressurised inflatable structure.

In order to verify the feasibility of the project a 1.5 ton unit was built to be used for tests and optimise the process. A D-Shape printer from the British company Monolite UK was used for the job: the machine has a series of mobile nozzles distributed along a six-metre frame which spray an amalgamating resin onto a sand-like construction material similar to the dust found on the Moon. This additive fabrication technology, which works by building up the structure layer-by-layer, has already been used to make artificial tide barriers that protect coastlines from heavy seas.

«First we combine the simulated lunar material with magnesium oxide. This creates a kind of “paper” that we can use for the printing process – explains Monolite founder Enrico Dini –. Then we apply a saline amalgam that converts the material into something more solid and as hard as a rock». The printer works at a speed of about two metres per hour, which should increase to 3.5 metres for the next generation of machines. «We will then be able to make an entire building in a week», Mr. Dini points out.

Also taking part in the project was an Italian company based in Pisa, Alta, that worked with the engineers at the Sant’Anna School of Advanced Studies in Pisa to find a way of adapting 3D printing techniques to function at the temperature and in the airless, low-gravity conditions of the Moon. «The process is based on the application of liquids, but of course, liquids tend to evaporate in a vacuum – says Alta’s Giovanni Cesaretti – So we put the nozzles on the 3D printer underneath a layer of lunar regolith. We discovered that when applying a drop on a scale of 2mm, the liquid remained trapped by the capillary strength of the Moon’s surface. This means we can be certain that the printing process will worked even in a vacuum». A basalt rock from a volcano near Bolsena Lake was used for the test, because according to experts this material is a 99.8% match with the surface of the Moon.

Another aspect causing space ship designers to scratch their heads is how to re-use waste materials. Simply jettisoning them into space would be neither ethical, nor efficient. Salvaging and re-using organic waste is already an established fact in the space, whereas inorganic materials, above all fibre, metal and plastic are ejected or – in the case of the International Space Station – stored so they can be brought back to earth on the same cargo shuttles that bring supplies in.

However NASA is looking at some alternative solutions that would give value to the waste material directly in space by thermo-mechanical recycling of bottles and other plastic materials, adhesive tape, aluminium foil and non-organic residue in general. The technology developed at the Ames Research Center in California is based on a special compactor that operates at temperatures between 150 and 180 °C for three and a half hours, conditions which are considered sufficient to sterilise the materials without compromising their physical properties.

The end product of this process is a disk of composite material measuring 20.3 cm in diameter and 1.3 centimetres thick, that can be reused inside space ships as protection against radiation. This would reduce extra load during take-off. The idea is to produce these tiles “in-house” as it were and use them to insulate dormitories or emergency refuges against solar storms.

The idea of using thin disks of miscellaneous materials as a shield against radiation might seem unrealistic on the surface, but it is actually based on sound science. The high concentration of plastic that comes from packaging, particularly from protective film, trays and bottles, does, in fact, offer good protection against cosmic radiation. It is especially effective against secondary radiation that is created when rays hit the metal shields giving rise to swarms of potential damaging particles. In such case the best protection is not given by thick, compact materials, but by more lightweight options such as water and plastic. NASA is so convinced that for several years it has been studying the use of polyolefin compounds in space ship hull construction.

The recycled disk are being tested by the NASA at the Kennedy Space Center. Researchers want to evaluate not only the mechanical performance and levels of protection offered, but also what effects the material might have on health and on bacterial and fungal proliferation, which could have adverse effects on the quality of the air in a closed environment. For this reason al the tests are carried out in conditions simulated to reflect those inside a space ship.

Once the coatings have been completed it will be possible to recycle waste into easily stored blocks given that their volume will be approximately 10 times less than that of the original material.