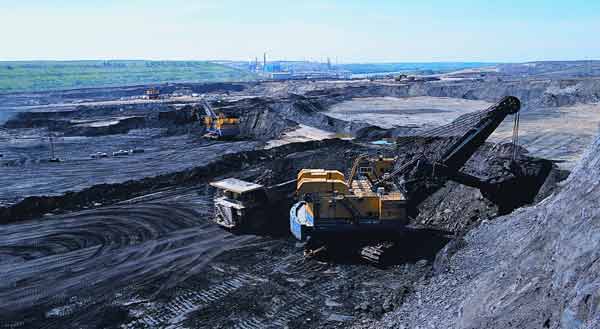 Shale gas fields are paving the way for low-cost production of polyolefins. This is an opportunity that the United States is keen to seize, but that sees the European authorities rather more hesitant, mainly because of concerns over the environmental risks

Whereas, on the other side of the Atlantic, in the pragmatic United States of America, many people see shale gas – or gas from oil shale – as an opportunity that, thanks to the low extraction costs, could lead to a new golden age for the energy supply and petrochemicals industry, in Europe this resource is regarded warily on the grounds of the possible risks to the environment, still not clearly identified. These developments are closely watched by the major oil and gas producers, from Russia and the Arab countries to the new South American players, which are fearful of losing the power they wield through their control of a resource crucial to the development and wellbeing of the Western world. 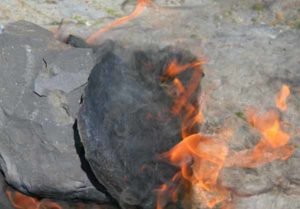 Shale gas – or gas from oil shales – is an “unconventional source” of natural gas, which is extracted from rock formations, or oil shales. These are argillaceous rocks, derived from the transformation, over hundreds of millions of years, of sedimentary material rich in organic substances – plant and animal remains. Unlike the case of conventional gases, where the deposit consists of permeable porous rocks into which the gas has migrated from rocks rich in organic matter, in which it is was generated, shale gas is trapped in the original rock itself, which is therefore rich in gas, but not particularly permeable (highly argillaceous). For this reason, the gas in these rocks does not all escape at the surface once they have been perforated. Indeed, these gas fields can cover several hundreds of kilometres.[/box]

An economical option
With oil destined, sooner or later, to run dry, and the nuclear option severely weakened after the Fukushima disaster, coal and gas are the only alternatives that remain. While coal, in areas where it is present in large quantities – China for example – can also be exploited by the petrochemical industry, it is gas that analysts expect to see providing the greatest benefits in the coming decades, partly thanks to the development of low-cost technologies for its extraction, november 2012 not from conventional oil fields but from shale fields, in which natural gas has been trapped from time immemorial. This is indeed why the International Energy Agency (IEA) goes so far as to talk of a “golden age” for natural gas, even envisaging that, precisely thanks to shale gas, the United States could be extracting more natural gas than Russia within a few years’ time.

Found pretty much everywhere
Unlike oil, coal and conventional gas, shale gas does not seem to be con¬centrated in just a few geographical areas; one might almost say that it could turn out to be a more “democratic” energy source. In Europe alone, important fields have been identified in Poland and the Ukraine, for example, but there are also thought to be large ones in Austria, France and Italy. It is the United States, however, that, for a variety of reasons, seems to be one step ahead of the rest in the exploitation of this resource: in the US, bureaucratic and environmental constraints are minimal and there also exists an open network of pipelines that facilitates the exploration and exploitation of these fields, also by landowners who, under American law, are also owners of what lies under their land. All this has effectively triggered a new “gold rush”, in true pioneer style; so much so that today, gas from unconventional fields already makes up 20% of the total, and it has been estimated that this proportion will rise to 60% by 2020. Globally, it is estimated that production of shale gas could triple by 2035.

[pullquote align=”right”]“Today, gas from unconventional fields already makes up 20% of the total, and it has been estimated that this proportion will rise to 60% by 2020”[/pullquote]

We are faced with a revolution that could alter the geopolitics of energy supply, allowing the United States and other Western countries to achieve full energy self-sufficiency; the possibility of producing ethylene from ethane gas at a much lower cost than that of producing it from oil would have major repercussions for the petrochemical industry. Among other things it would mean cheap polyolefins, capable of competing with those produced in the Middle East, where projects costing tens of billions of dollars are in progress; and this could completely sideline the mature operations in Europe, where gas is currently 3-4 times more expensive than it is in America. 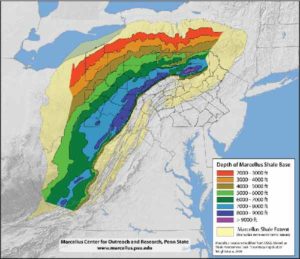 The largest shale gas formation currently known is the Marcellus Shale Gas Formation in the western United States: it takes its name from the Pennsylvania town around which, for a small stretch, this sedimentary rock reaches the earth’s surface: in actual fact, these underground shales, dating back to the mid-Devonian period (about 400 million years ago), extend, as a belt, several hundred kilometres, reaching parts of Ohio, West Virginia, New York, Maryland, Kentucky, Tennessee and Virginia. They thus lie to one side of the Appalachian Mountains being a trench field linked to the formation of this range. Reaching a depth of 3,000 metres, these shales are remarkably thick. As a result, these particular shale gas fields are ideal for the extensive extraction of natural gas.[/box]

Major projects in the USA
America seems to believe in these promises and is, typically, brushing doubts aside and finding the necessary economic resources. The most recent development is ExxonMobil Chemical’s announcement that it has applied for a permit to build, in Baytown, Texas, a new steam cracker, with a capacity of 1.5 million tons per year, for separating ethylene from ethane, and, at the nearby Mont Belvieu plant, two polyethylene units, each with a capacity of around 650,000 tons per year. The work could start as soon as the early months of next year, allowing production to begin by the end of 2016. Chevron Phillips Chemical, too, is keen not to miss the “shale gas boat”: in this case, the plan is to build two polyethylene plants in Old Ocean, Texas, each with an annual capacity of 500,000 tons, to be started up by the end of 2017.

The project, announced in March last year, also includes the construction of a 1.5 million ton cracker in Cedar Bayou, which is also in Texas. Shell Chemical, on the other hand, has its sights set on Pennsylvania: the U.S. petrochemical group chose Beaver County to build a new petrochemical complex consisting of a world-scale ethylene cracker plant, which will extract natural gas from the nearby Marcellus shale fields, which could be integrated, downstream, with the production of polyethylene and other derivatives, such as monoethylene glycol.

[pullquote align=”left”]“Globally, it is estimated that production of shale gas could triple by 2035”[/pullquote]

Another leading producer of polyolefins with interests in the USA, LyondellBasell, has been awarded a 4.5 million dollar grant by the U.S. Department of Energy (DOE) to develop a catalyst-assisted technology capable of improving the energy efficiency of producing ethylene from ethane gas. The three-year research project will see LyondellBasell working in collaboration with Quantiam Technologies and BASF Qtech. Its aim is to extend a recent ethane and naphtha-fed catalytic coating technology for steam crackers developed by BASF Qtech to ethane and natural gas liquid-fed steam crackers. The partners will add a further 2.2 million dollars to the 4.5 million provided by the US government.

Europe looks on
In Europe, the situation is quite different. Here, there is more control over the gas pipeline network and the right to exploit subsoil resources lies in the hands of the states and not of private individuals; then of course there are the bureaucratic procedures necessary to obtain concessions for the exploration and exploitation of natural resources.
The greater population density also makes it more difficult to operate without coming up against local communities, which, as soon as they hear talk of fracking, are understandably alarmed. But what really seems to be holding back extraction of shale gas in Europe, more than bureaucracy and regulatory constraints, is the environmentalist faction, in some cases helped – in a broad sense – by lobbies that see this new energy source as heralding the end of well-established balances and of oligopolies that have, up to now, been highly profitable.

[box title=”Extraction by means of fracking” color=”#f8911b”] The gas that is trapped in highly porous shale rocks is extracted by means of high-pressure injection, underground, of a mixture of water, sand and chemical additives, which fractures the strata, causing the release of natural gas, which is transferred to storage facilities prior to consumption.

The technique has been in use for almost half a century, but in recent years, in which it has been combined with horizontal drilling, it has become more efficient. The fields are located at depths of between 2,000 and 4,000 metres: they are reached by vertical drilling as far as the rock layer and then horizontal drilling into the rock strata; this is followed by hydraulic fracking. However, these fields have a lower yield than traditional gas: around 30% versus 70% or more.[/box]

Thus, pending scientific insights into the environmental risks of this gas extraction technique, France has suspended the use of fracking; Bulgaria, Romania and the Czech Republic have followed suit, suspending or revoking concessions until the scientific community comes up with definite answers. Poland too, which had hoped to achieve energy independence from its neighbour, Russia, is considering introducing a temporary suspension, as a result renouncing to something like 2,000 billion cubic metres of gas, even though only some of this can be extracted using currently available technology.

[box title=”The other side of shale gas” color=”#f8911b”]Not everyone is convinced that fracking is the solution to the energy problems of the mature economies. Some have raised the issue of the risk of pollution of groundwater by the gas and others believe there is a connection between fracking and the occurrence of microseisms in some drilled areas, even though there is no scientific evidence to this effect. Conversely, the emission of quantities of natural gas, a climate-changing gas more harmful than carbon dioxide, which can escape from the fields, seems to have been demonstrated. A recent IEA report – “Golden Rules for a Golden Age of Gas” – contains rules that would minimise the impact on the environment. However, these, if correctly followed, would increase the costs by about 7%.[/box]

Another runner in the shale gas race is Italy which, through ENI, has just acquired a 50.1% stake in the Ukrainian company Westgasinvest and, with it, exploration rights in the Ukraine. The Italian group, strengthened by technological expertise acquired through a joint-venture started in Texas, began investing in shale gas in 2010, buying three licences in the Baltic area and in Poland. In other parts of the world, it is not environmental concerns that are preventing the exploitation of this resource, so much as a lack of the huge amounts of water needed for the extraction of shale gas: water is injected at high pressure into the subsoil to break up the rocks and release the gas.

For this reason, China, despite having the world’s largest shale gas reserves, has difficulty exploiting it. Since, for the moment, we have sufficient oil and gas, the game remains open. But clearly, in view of the time needed to explore, exploit fields, and invest in downstream plants, it is now that the strategies need to be put into place. As a result, it is a game that Europe risks losing before it has really begun, with all due respect to countries like Italy which relies on just a few countries for its energy supplies – countries that do not always enjoy its own level of political and economic stability.