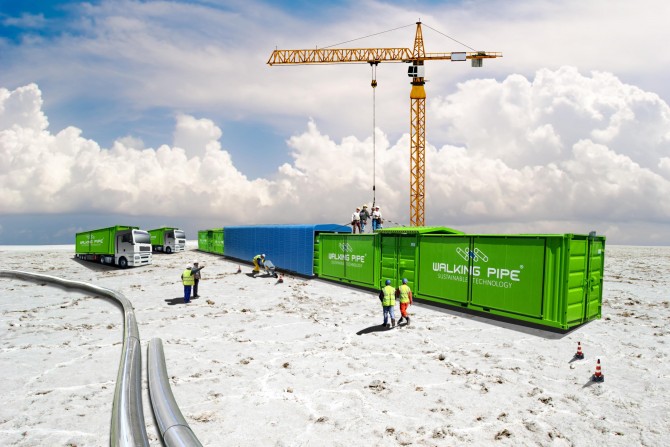 Producing plastic pipes where they are needed. The Walking Pipe project was developed by the Italian company Supertech Industrie

Plastic pipes are light, but they take up a lot of room: transporting them is expensive and far from efficient. It is definitely a better idea to manufacture them near the site. This is the concept behind the Walking Pipe project, the brainchild of and developed by the Rovigo-based Supertech Industrie, a company specialising in the production of joints and fittings. Instead of transporting pipes from the factory to the place where they are to be laid, the extrusion plant is moved to the site, installed on a container, together with the power generating unit and, located on a second vehicle, a quality control laboratory for raw materials and finished products. When the construction works are over, the factory simply returns to the company, ready for the next location.

Experimented in France
This technique has been successfully experimented in France, in the natural park of Verdon, in Côte d’Azur, at a site belonging to the Bouygues group. In little more than a year, 250 kilometres of SDR 26 tube (250 millimetres in diameter) in high density polyethylene was commissioned. Having verified the feasibility and the cost of the mobile facility, at the end of last year Supertech launched the start-up, Walking Pipe SpA, headed by a young entrepreneur in her early thirties, Marta Rimbano. An ambitious project which has already attracted the interest of other contractors for sites around the world, but which requires further investment. In fact the company is looking for industrial and financial partners for future developments. As Nazareno Rimbano, marketing director for Supertech Industrie explains: «Walking Pipe is attracting a lot of interest, but we are a small enterprise and it is difficult to find credit for new investments. This is why we are looking for private equity or venture capital companies interested in investing their money for the start-up to take off».

The advantages of the Walking Pipe technology

Economics and sustainability
In the meantime, new sites are opening. The first will open over the next few weeks in Bordeaux, France, and another two are being planned for Normandy and Savoy. In all the French projects, a desire to make piping more sustainable from an environmental standpoint is driving mobile manufacturing forward, drastically reducing transportation by road. «With Walking Pipe, we can extrude very long pipes, even hundreds of metres long, without joints, as long as we don’t have to cut them for transportation – Rimbano says –. This feature has attracted the interest of marine installation and mine operators. In addition, at one of the sites starting up in France, we extrude polyethylene pipes with 160 millimetre diameter into large bobbins 360 metres in length: because they are 4.5 metres wide, transporting them from the factory to the site would require oversize means of transportation». According to Rimbano, it is the absence of transportation costs, with industrial costs being equivalent to permanent installation costs, that makes Walking Pipe convenient also for the customer.

Everything on a container
The Walking Pipe extrusion line, loaded onto a normal container, can produce up to 850 kg/h of pipes in various diameters, up to 315 millimetres. Designed by Supertech Industrie, it was for the most part constructed by the Bergamo-based Tecnomatic. The system incorporates a 37 L/D (model Zeus 75) single-screw extruder, Venus 800 extrusion die-head with internal cooling system type “PAC”, coextruder (Mizar 24), a calibration tank and three cooling tanks of six metres. A second container is set up as a quality control laboratory.

Film trimming: the importance of details