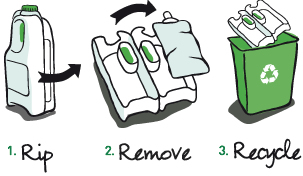 A bottle set to replace plastic, glass or polylaminated bottles has been developed in Great Britain. Consumers seem to like it, and not only because of its environmental benefits

Each day, 15 million plastic bottles are consumed in the United Kingdom, many of which end up in landfills (130,000 tons of waste each year) or, worse, they are irresponsibly discarded in the environment. Also other types of drink containers used on the British market – such as polylaminates or laminated cardboard – contain materials (for example aluminium or plastic film) that make recycling difficult on common systems. Martin Myerscough, a mechanical engineer at Framlington (county of Suffolk, in the east of England), appears to have found a solution: GreenBottle, the first paper bottle with an inner plastic liner. Devised initially for milk, it has already been available for more than a year on supermarket shelves in the UK as an alternative to PET or HDPE bottles and to polylaminates, today it is also proposed for the wine, fruit juice and household market. 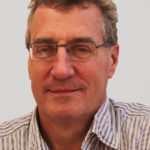 The paper casing and inner plastic lining can easily be separated and one part be sent for composting, the other for recycling

The concept and its success

The bottle designed by Martin Myerscough consists externally of recycled paper and it has an inner polyethylene bag, also made from recycled material. The percentage of plastic in the packaging is a third of what is in conventional bottles. As its name suggests, GreenBottle – which meanwhile has become the name of the company based in Woodbridge, in Suffolk – the container is to a large extent biodegradable and compostable: after use, the paper cup can be separated from the inner bag and recycled or disposed of by composting, while the plastic can be thrown in the waste heap (taking up much less space in the landfill than traditional HDPE bottles) or it can be sent for recycling at a facility for post-consumer plastic materials.

This creates a loop that seems to appeal to consumers, who are mindful of making ecofriendly choices. Initial market research has shown interesting results: six months after its launch, the quantity of milk sold in GreenBottles in the south east of the United Kingdom was triple that of milk sold in conventional plastic bottles.

«Research into customer satisfaction has shown that more than 80% of people who tried the new bottle preferred it to plastic – Martin Myercough said – and they immediately demonstrated that they understand the environmental advantages that it implicates. The price is identical to an HDPE bottle, against which we want to be competitive. In addition, production of each GreenBottle has a much lower carbon footprint (-48%) than the production of a similar plastic container. The plants used can package 50 bottles of milk a minute, and are protected by trademark. For now, they are located along way from England, in Turkey. Soon, however, a factory will be opening in Cornwall: the goal is to sell this technology to other companies, to enable them to make containers in addition to bottling facilities, thus saving shipping costs».

In 2007 the container won the Green Award, a prize dedicated to brands or organizations that have stood out for the ways they value the concept of sustainable development in innovative ways, through the power of communication and marketing strategies.

Myerscough and his company signed an agreement last June with an independent supplier of wines and spirits, Kingsland Wines, to produce the first paper bottle to be used for various types of wines. Compared to the 400 grams of a 750 ml glass bottle, the paper bottle weighs 55 grams thereby reducing transportation and shipping costs, with advantages also for consumers, as a result of handling a much lighter product, not to mention one that is shatterproof. In addition, carbon dioxide emissions for the production of the new container are 10% that of a conventional glass bottle, which in the United Kingdom is widely consumed (1.2 billion bottles a year).

The new company created between GreenBottle and Kingsland will have solid credentials from an environmentally friendly standpoint: an added value that the market and British consumers really appreciate. In fact, Myerscough’s company has opened a new bottle production facility in St Helens, Merseyside, near the general headquarters of Kingsland which is located in Irlam (Manchester). The latter, which imports bulk wine, was the first company to reuse the Manchester Ship Canal as a “river highway” to transport large containers to its site in Irlam, removing 2,000 lorries from Britain’s roads each year. Therefore, the GreenBottle project will contribute even more to reducing carbon dioxide emissions.

From a technical standpoint, it should be emphasized that wine stays fresh for a long time even outside the fridge in paper bottles with a plastic inner, because the inner polyethylene bag is similar to a traditional cylinder for the bottle. But purists will probably turn their noses up and will not be willing to pour a good wine from a paper bottle. Martin Myerscough, who hopes that the container can replicate the success it has for milk, wanting to keep the traditional form of the wine bottle with the intent of “reassuring” consumers: «We could have gone further – he explained – but we invented a new concept and it was not our intent to overwhelm the public. If we want to convince consumers to change their habits, we need to do it gradually».

Towards the closed loop