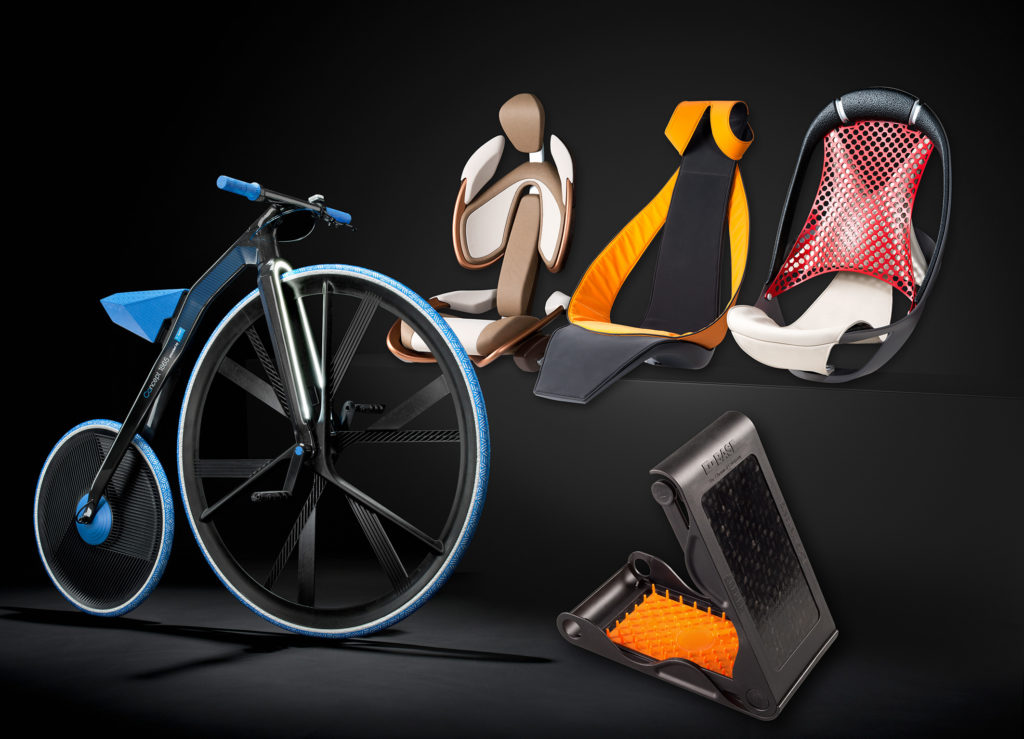 Two weeks before the K 2013, BASF prepares visitors to the plastics industry exhibition for even more exciting new ideas. In addition to a remarkable plastic bicycle with more than 20 plastic applications, some of them highly innovative, three unique prototypes from the winners of the “sit down. move.” auto seat design competition will be displayed. Visitors will be able to sit down on more than 200 A-chairs from Brunner. A demonstration kitchen element from Blum will show the functionality of high-performance sliding and guide elements in drawers and cabinet hinges. The big live event will be the production of a multi-material protective case on the basis of the new Ultracom™ product and service package for fiber-reinforced composites. At machine manufacturer Engel’s stand, visitors can experience the RTM process (resin transfer molding). For this purpose a lock shroud for the sports car X-Bow by KTM will be produced in an RTM process as a demonstration on an Engel v-duo 700 on the basis of a BASF polyurethane system.

Using production of a multi-part hard-shell case in a live demo at the booth, BASF will demonstrate the competence in materials and processing technologies that it offers in Ultracom, its new product and service package for continuous fiber-reinforced composite parts. As part of the demonstration, Ultralaminate™ thermoplastic laminate inserts that were manufactured earlier will first be subjected to a plasma treatment to ensure optimal adhesion to the soft component, and then be placed by a robot (from the FTP Co.) into a mold from the Glittenberg Co. In the central step, Ultralaminate will be overmolded with the Ultramid® (PA) rigid component and the Elastollan® (TPU) soft component. Every two half-shells manufactured in this way can be assembled to form a lockable case. The injection molding machine is being provided by the Arburg Co.; the plastic colorants are based on pigments from BASF. Under the umbrella of its Ultracom package, BASF is currently offering, in addition to Ultralaminate, also Ultratape™ with the appropriate overmolding compounds based on Ultramid COM and the associated development platform with design, manufacturing and testing know-how.

An e-bicycle as “thought experiment”

Bicycles made almost entirely from plastic have existed for a long time. What has not existed to date is a concept e-bicycle that incorporates as many different, and sometimes very innovative plastic types, that contribute their specific benefit. On the basis of the Performance Materials platform formed in January 2013 to consolidate plastics from polyurethanes through thermoplastics, foams, epoxy resins and composite products, BASF is exhibiting a concept bicycle to demonstrate potential capabilities: conceived by the design agency DING3000, the “Concept 1865 – Rethinking Materials” e-bike utilizes more than 20 different BASF plastics. Why 1865? BASF was founded in the year that the first pedal bicycles appeared: This is why the functional and ready-to-ride bicycle design study has taken the shape of a historic high-seat bicycle. It embodies a “thought experiment” on the subject “Rethinking materials”. The vehicle is an invitation to customers to challenge established products and to develop together with the company new application ideas for mobility and urbanization on the basis of modern plastics.

At the K 2013, BASF will exhibit to the general public for the first time the prototypes of three winning concepts from the first global “sit down. move.” design competition for automobile seats. As announced in March 2013, the company has had full-scale models of the three winning prototypes from the concept study produced and is now exhibiting these objects to visitors attending the trade fair. The prototypes are based on designs from Song Wie Teo (University of Coventry, UK), Joonyoung Kim (College for Creative Studies, Detroit, USA) and Pantila Debhakam (design agency shakes bkk, Bangkok, Thailand), and are characterized by a combination of creativity and an understanding of BASF materials.

The new “Servo Drive” concept from Blum can be experienced firsthand in a transparent kitchen cell: the smooth, damped and in the meantime electrically powered opening and closing of drawers and flaps requires guide rails and elements with demanding sliding properties. This is where the engineering plastics Ultraform® (POM) and Ultramid (PA) are applied.